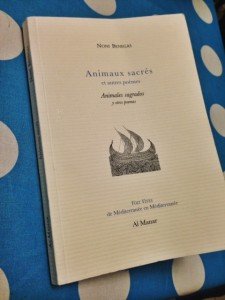 t’s an act of triple filtering to want to share the poetry of Noni Benegas, translated from Spanish into French, and now shared with you in English. Although an English translation of her poems, Burning Cartography, was published in 2007, I have to admit that it’s sheer luck while riffling through the Saint-Denis bookshop Folies d’Encre that led me to her work.

Yet, Benegas is no novice, born in Argentina, she moved to Spain in 1977 and has won numerous accolades for her work in the years since, including the prestigious Esquío, Platero and Miguel Hernández Prizes. This particular collection, Animaux Sacrés et autres poèmes (‘Sacred Animals and other poems’) was published as a part of a literary festival in Sète called Voix Vives, celebrating Mediterranean poetry in all its languages. It’s published as part of a series of identical-looking pamphlets with ribbed jackets, and the signature image of a boat. (I am not a fluent Spanish reader, so will only share the French translations as that is what my ham-fisted translations are based on.)

The sacred animals of the title feature most prominently in a sequence of the same name, a series of vignettes in which animals take on different roles within the family.